A Church where Everybody is Somebody and Christ is Lord of All. 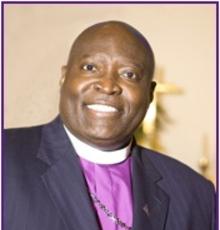 The Episcopal Committee of the 50th Quadrennial Session of the AME Church General
Conference makes the following Episcopal Leadership Assignment for the 2016-2020
Quadrennial. They assigned Bishop Dennis Vernon Proctor to the North Eastern Episcopal
District (New York, New England, and The Bahamas).

A native of Buffalo, New York and a graduate of the Syracuse, New York public school system, he received his Bachelor of Arts (Summa Cum Laude) from Livingstone College, Master of Arts in Pastoral Care and Counseling from Ashland Theological Seminary, a Clinical Pastoral Experience Diploma from Western Reserve Psychiatric Habilitation Center, a Juris Doctor from The Ohio State University College of Law, and a Doctor of Ministry (Samuel D. Proctor/Otis Moss Fellow) from the United Theological Seminary. He was inducted into the Martin Luther King, Jr. Board of Preachers at Morehouse College, Atlanta, Georgia. He was honored by his Alma Mater to receive the Doctor of Divinity from Hood Theological Seminary and Livingstone College. He was a featured lecturer at the prestigious Hampton University, Hampton Minister’s Conference. He was appointed by the University to be the Conference Historian, becoming the first Methodist to serve as an officer in the organization's history. In addition, one of his sermons is published in the book of "Outstanding Black Sermons Volume 4" Judson Press, and he is a contributing author in "Doing Church Vol.2" New Seasons Press.

He is the Founding President of the Congress of National Black Churches, Baltimore Affiliate. He served on his denomination’s Connectional Budget Board, Overseas Missions Board and co-authored Christians Under Construction.

Bishop Proctor has held three pastorates: St. James A.M.E. Zion Church in Massillon, Ohio, where he led the congregation in the building of a new church and purchased a parsonage. His second pastorate was the St. Luke A.M.E. Zion Church of Wilmington, North Carolina. There he led the congregation in remodeling the church, purchasing a new parsonage and commissioning a life size mural. His last pastorate was the historic Pennsylvania Avenue A.M.E. Zion Church in Baltimore, Maryland. Remodeling the facility, acquiring additional property, creating a full-time ministerial staff and implementing over twenty ministry areas are among his many accomplishments there. Each of his pastoral appointments accepted the challenge of technological development and biblical stewardship as a means of financing the work of Kingdom building.

He is a fifth generation preacher and the son of the late Rev. Emory C. and Rosie T. Proctor. He is married to the former Deborah Diane Wilson, and they are now officially empty nesters!