A Church where Everybody is Somebody and Christ is Lord of All.

The Cross Street A.M.E. Zion Church was founded by Reverend James Anderson in 1823. It is part of the African Methodist Episcopal Zion denomination that was established in 1796 in New York under the direction of James Varick, in first Bishop, The Reverend Jehiel Beaman, the son of a former slave from Colchester, became the first Pastor of A.M.E. Zion Church. An avid abolitionist, he was not only a formidable leader of the church but extremely active in the small African American community in the City of Middletown and became an important leader in the abolitionist and temperance movements on a state-wide level. Due to his involvement, this church was called "The Freedom Church" by many people.

The original church was built in 1829. The members purchased land from a Mr. Henry Paddock and the church was constructed on Cross Street, which at this time faced Mt Vernon Street currently the site of the Science Center of Wesleyan University. The construction of this church was such a financial strain that the members were not able to pay the Reverend Beaman for his services as pastor. So Reverend Beaman and his son Leverett, a shoemaker by trade, opened a shop on William Street in Middletown to support his family which consisted of his wife Fannie and their seven children. One of his sons, Amos, was ousted from Wesleyan for trying to obtain an education. He went on to become a well known minister and abolitionist. His daughter-in-law, Clarissa, founded the Women's Anti-Slavery and Temperance Movement of Women of Color.

Cross Street and the A.M.E. Zion Church were formed before the Civil War forced an end to the institution of slavery. The sole purpose for its formation was to secure a place for people of color to worship freely. Many men and women rose to this task and it is to their testament that in 1998, one hundred and seventy-five years later, we are witnesses to their dreams for we have endured by the power and faith of the Lord. In May of 1993, the Rt. Reverend George W.C. Walker, Sr., appointed the Reverend Moses L. Harvill as the Pastor of the Cross Street Church. Under his leadership the Church continues to grow spiritually, numerically, and financially. The Church and parsonage mortgages have been liquidated. The Church has purchased two vans, new state-of-the-art Hammond organ, audio system, computers and copier and other office and Church equipment. Pastor Harvill has launched the Vision 2000 campaign for the building of our faith, ministries and new Church. We give God all the glory for the things he has done as we celebrate 190 years of Christian Service.

On December 23, 2007, we rejoice in the miracle on West and Wadsworth Street by opening the doors to the New Cross Street A.M.E. Zion Church.

The Right Reverend George E. Battle, Presiding Bishop and Mrs. Iris Miller Battle, Missionary Supervisor was so very thankful that God has afforded us the opportunity to share and participate in this auspicious occasion.  Look at what God has entrusted to the members of this Church; to the community in the City of Middletown; to the State of Connecticut; and especially to the African Methodist Episcopal Zion Church.  My heart and I pray that your hearts cannot fully express the gratitude we feel for how God has provided and for how He has worked through all of us to meet the needs of those we now serve and the many who will come that we will assuredly serve in the future.

The Connecticut Freedom Trail quilt is displayed at the State Library Museum in Hartford.  Two of its 154 patches representing the historical sites that were significant in the struggle for freedom for African Americans of Connecticut were created in Middletown. In 1998 the Cross Street A.M.E. Zion Senior Ministry, with help from other volunteers, sewed a quilt square highlighting the Church, the Benjamin Douglas home and a slave tombstone.

On September 20, 1998, the Connecticut Bicycle Coalition rode the entire Freedom Trail through the towns of Connecticut to collect the 154 quilt patches. These freedom bikers met the Cross Street Sunday School at the South Green Park where the children presented them with Middletown’s two colorful, artistic Freedom Trail squares.

At a huge quilting bee, members of the church Senior Ministry, headed by Reverend Frances Perry, helped sew a part of the 154 patches into two large quilts which are now permanently on display at the Museum of Connecticut State History. The Museum and the Connecticut State Library share the same building which is across the street from the State Capitol. Museum hours are Monday through Friday from 9:00 until 4:00 and Saturday from 9:00 until 3:00. This beautiful, historic quilt is a must see for all citizens of Connecticut.


Testimonials from members of the Senior Ministry who helped stitch the Cross Street Freedom Quilt Patch in 1998:

Mary Chisholm
I did the stitches on a tree on the Middletown freedom patch, but I felt like I wanted to sew even more. The only problem was that there were too many sewers, but I still wanted to make sure that I had another opportunity; after all I was the oldest member of the group. So I demanded in my most aggressive voice, “Save some stitches for me, I want to sew some more!” It worked because pretty soon the patch came back to me. When my granddaughter, Mardi, first showed me the unstitched patch, I didn’t think much of it but I did not tell her how I really felt. By the time we finished stitching everything, I sure changed my tune. Now it was very beautiful. I’d like to sew some more.

Hazel Hewitt
The tombstone, the Benjamin Douglas house and the church on our freedom patch are all symbols representing paths to freedom in Middletown, but there was another symbol that we should have put on our block and that was a book. Besides sewing our square, I also had the opportunity of going to Hartford to the Faith Congregational Church where all the patches from all the towns were being sewn together. The squares were so beautiful; the creators paid attention to so much detail. Later in the year, when I went to view some Amish quilts in Pennsylvania, I was able to see them as I had not seen them before because of the Freedom Trail quilting bee experience. Looking at all the patches made me realize how important each doily and piece of lace is. I will never throw away these memorable fabrics of my life but will instead preserve them in quilts.

Mary Lee Jones
After we sewed our quilt square in Middletown, we were all excited about going to Hartford to participate in the big quilting bee. When we arrived, the quilting coordinators showed us what to do but the other ladies from our church could not settle down and start sewing. Instead, they just roamed around in a daze admiring the stunning quilt patches. But not me! I didn’t hesitate for one second. I jumped right in and started basting. You see when I was a child, I loved hanging around with the old folks, but they didn’t love me hanging around with them. In fact the only time they would let me hang around was when they were quilting. My mother made quilts and when I got to the quilting bee, I remembered how badly I wanted to quilt as a child. The old folks let me sew on the old quilts while they made the new ones. That’s why I didn’t waste any time getting started. I loved sewing at Faith with all the other women; the only problem was that the time went by so quickly and it was time to go home.

Alice Moody
I attended the senior meeting the day we were to work on the Freedom quilt patch only because I heard Mardi Loman was coming to the meeting to talk about African American history. I was very interested in studying history but I had no desire to do any sewing. Arts and crafts were never my thing. As we laughed and talked during the meeting, we passed around the quilt square and everyone did the stitching. The surprising thing was that I and another member, Sara Ruffin, did the greatest share of the sewing and I was really enjoying myself. In fact I even decided that I would go help sew all the Connecticut patches together at the quilting bee in Hartford. I am so happy that I was able to see all the beautiful patches and be part of this historical event.

Reverend Frances Perry
I was very excited when Mardi Loman called me to ask if the seniors would work on the Middletown Freedom Trail patch. We had already enjoyed making a quilt commemorating past church leaders and we couldn’t wait to get started on the freedom patch. We did all our stitches by hand and there were a lot of them to do. We extended our Senior Ministry meeting until we finished the whole square. We were so excited the day we arrived at the Faith Congregational Church to join the other quilters; it was a precious sight to see. Everyone should go up to Hartford to see the Freedom Trail quilt when it is put on display. 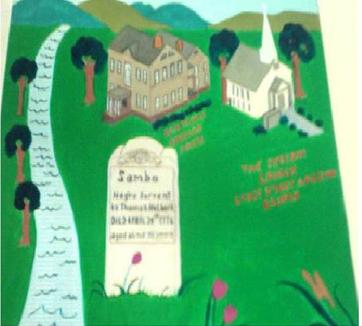